Watsons Bay is located on the southern head of the entrance to Sydney Harbour. To the east is the Tasman Sea and to the west is the Harbour with a glorious view of the city of Sydney in the distance. 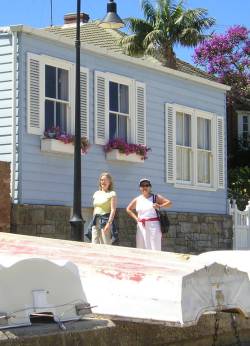 Watsons Bay is where Governor Phillip first landed in Australia. It's also recognised as Australia's oldest fishing village, having been established in 1788.

The Bay is famous for being the home of the first Doyles Restaurant. The site on which the restaurant now stands is where Doyle originally sold his daily fish catch in 1845. It's well worth the trip to Watsons Bay to eat at the restaurant or, alternatively, for a more informal meal, buy a take-away lunch from Doyles' fish and chip outlet, located on the wharf, and eat it in the park and feed the seagulls. 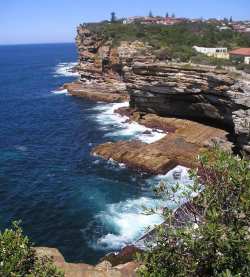 There are two walking paths from the wharf, both require around one hour for the round trip. From the wharf you can walk north past Lady Bay (see their nude beach) and on to South Head and see the Hornsby Lighthouse. Alternatively, you can walk south past The Gap and take in Signal Station and Macquarie Lighthouse. See the site of the wreck of the Dunbar.

You get to Watsons Bay by car along Oxford Street (it changes to Enfield Drive) out of the City. Follow the road left into Old South Head Road and continue along this road to Watsons Bay. If you're going by bus then catch the 324 from Circular Quay. Alternatively, you can catch a ferry from the Quay.

Considering dining at Watsons Bay? Select from a range of restaurants and cafes to suit any culinary fancy. 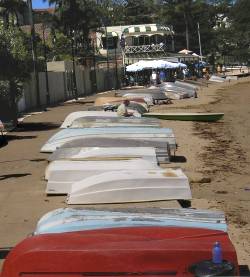 The Promonade at Watsons Bay

Allow yourself a good half a day to see all that Watsons Bay has to offer.

When leaving Watsons Bay, travel south by car along Old South Head Road and turn left into Military Road (changes to Campbell Parade) to take you to Bondi Beach