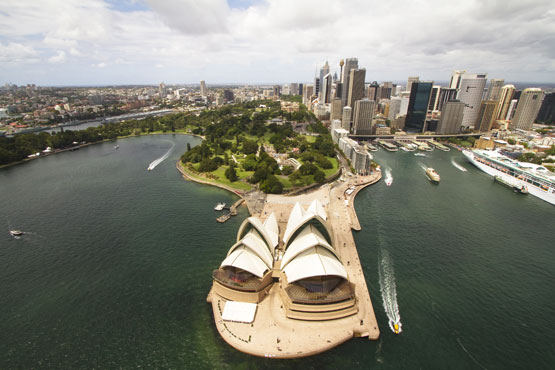 The Sydney Opera House on Bennelong Point. Behind the iconic building is Government House, and behind that the Sydney Conservatorium of Music. To the left is the Royal Botanic Gardens, and to the right, Circular Quay and the city skyline. Picture: ©Steve Munro/123RF.COM  → More Opera House pictures below

Today, it is impossible to imagine Sydney Harbour without Jorn Utzon's masterpiece - the structure is the most recognisable man-made feature on the harbour and is at one with the Bennelong Point shores it embraces.

It attracts huge numbers of local and international tourists every year.

The building today is described on the Australian government's own website as "an architectural icon of the 20th century", yet not many visitiors would be aware that the NSW goverment of the time villified its creator to the point where he was forced to close his office and leave the country.

The opera house may well be an international icon today, but history tells us it was the centre of huge controversey during its construction. The irony of the opera house story is that its creator never got to see it when completed.

In 1957, Danish architect Jorn Utzon unexpectedly won a competition to design the Sydney Opera House, his submission being chosen ahead of 233 designs from 32 countries - some of these from the most famous architects of the time. One of the judges described Utzon's design as a work of genius.

Utzon's design was considered a sculpture: on one hand, it was graced with a series of "sails" that symbolised the thousands of yachts that sail Sydney Harbour's waterways; on the other hand, its shape could be interpreted as huge "sea shells" that act as a metaphor for Sydney and Australia's relationship with beaches and ocean. The Australian government's website pays tribute to the structure: " It was his [Utzon's] intention to create a sculptural form that would relate as naturally to the harbour as the sails of its yachts."

The opera house can even resemble a butterfly when lit up with coloured projections during Sydney's annual Vivid Festival in May and June each year.

Utzon may have been a genius - a man ahead of his time - but his unique design created problems for lesser-mortals in the engineers charged with the task of making the structure a reality. Tenders were put out without adequate working drawings and once construction work began it was discovered the podium columns were not strong enough to support the roof, which had to be rebuilt. As a result of these complications costs rose and Utzon's design fell foul of the newly-elected government in 1965. The Minister for Public Works, Davis Hughes, a controversial figure in his own right,not only questioned Utzon's design and costings, but his abilities as an architect. The minister refused to pay the work's running costs, promting the Dane to close his office and left Australia, vowing never to return. This was extremely difficult for Utzon because, apart from not seeing his creation brought to life, he had come to love Sydney and Australia and the way of life.

When Utzon walked away from the project it also brought repercussions for him in his home country, where he was called before the Danish Institute of Architects and told that his actions in Sydney were deplorable. Black-listed for life by his colleagues, Utzon had to move from Denmark to obtain work.

When Utzon left the Opera House project in Sydney, the sails were almost complete and costs amounted to only $22.9 million, but major changes to the original plans for the interiors saw costs rise to $103 million.

The opera house was completed and opened by Queen Elizabeth in 1973, but Utzon was not invited to the ceremony - nor was his name mentioned during the speeches. He never returned to Australia and never got to see the famous building he created.

Even today the Sydney Opera House remains mired in argument about poor acoustics and lack of space in its most important theatres, but nobody can deny the genius of the design and the role the structure has played in projecting Sydney and Australia onto the world stage. The shell-shaped wonder is recognisable to all people, in all countries, and is one of Sydney's most popular tourist attractions. The amount of money it took to create this man-made wonder seems trifling in today's world, and you can't help but wonder what would have happened if small-minded politicians had had their way and the project was killed off in the early stages. Ironically, the NSW government recently spent &700 million refurbishing the Opera House, refurbishments that were considered by Utzon family members not to be in the spirit of the great architect's design.

Australia owes much to the genius of Jorn Utzon, a man truly ahead of his time, but whose time came to an end in November 2008 when he died in Copenhagen following a heart attack. Thank you, Jorn Utzon, masterful architect, for your wonderful legacy and may your soul rest in peace. 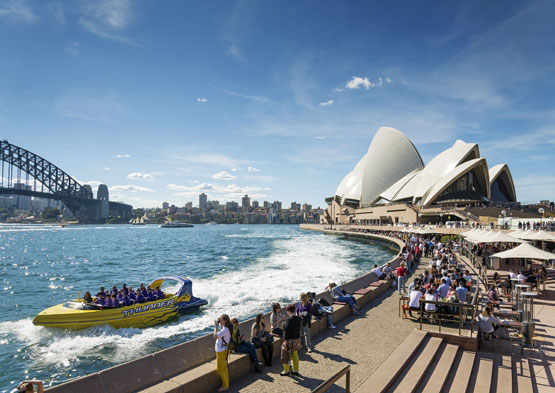 The Sydney Opera House, positioned on Bennelong Point next to Circular Quay and adjacent to the Sydney Harbour Bridge, is the centre of activities in the city.
Picture: ©Jack Malipan/123RF.COM 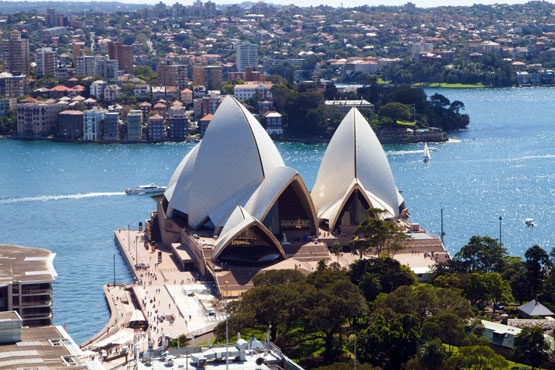 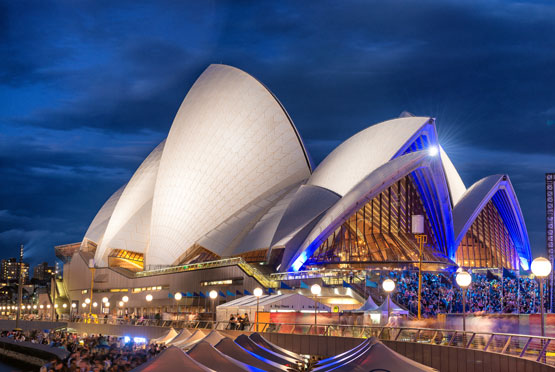 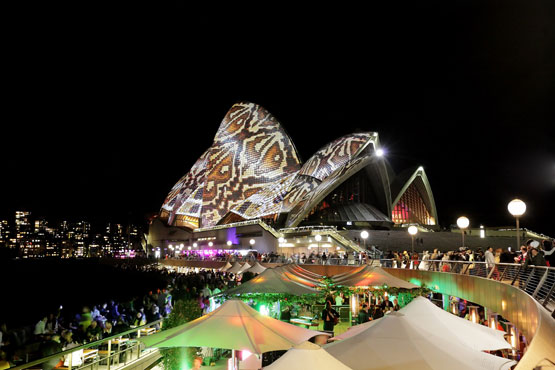 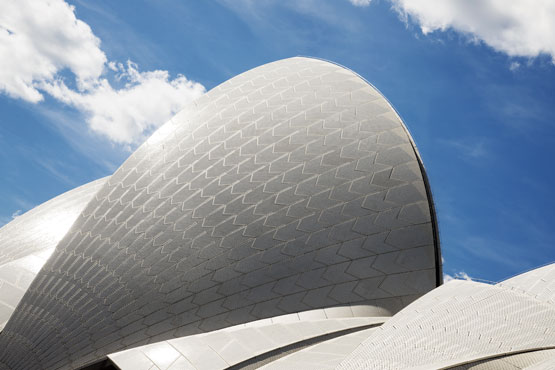 The sails of the Sydney Opera House.
Picture: ©Jack Malipan/123RF.COM 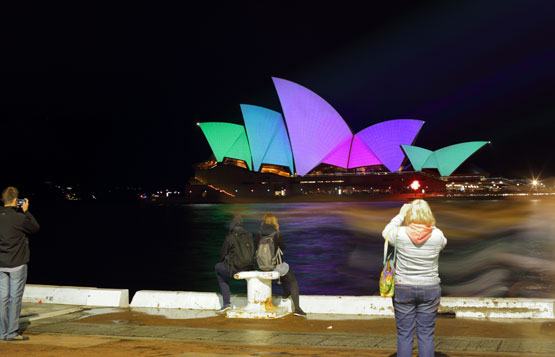 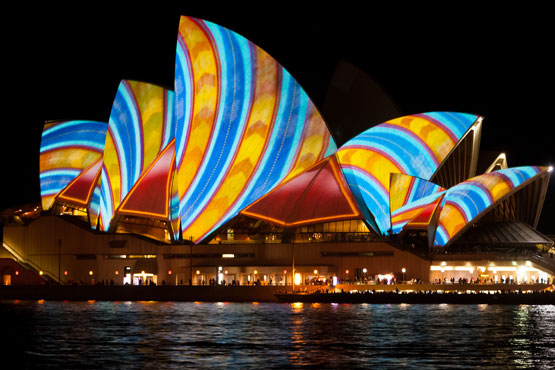 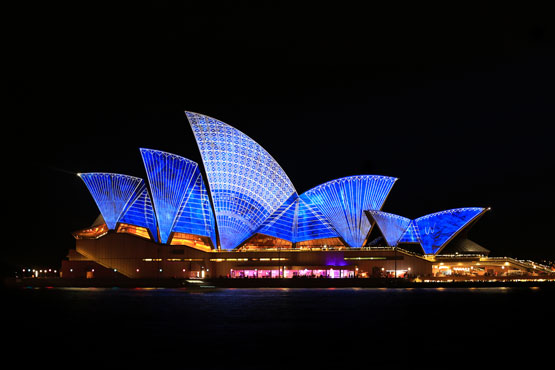 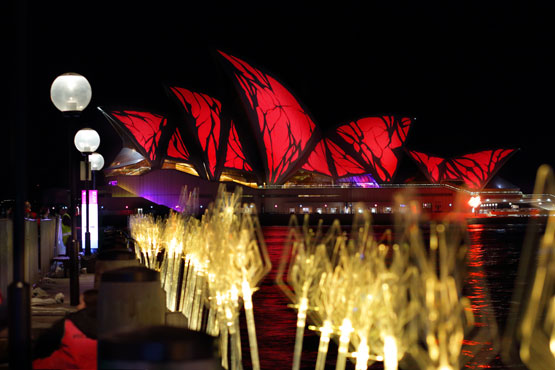 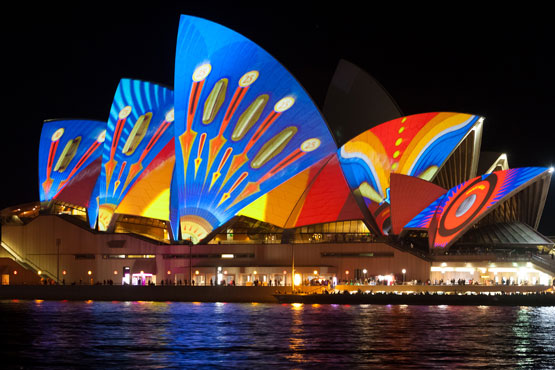 The Opera House is home to the following institutions:

Performances by the various companies are being conducted all the time at the Opera House.

Choose from a one or two hour tour that take in the extraordinary history, breathtaking architecture and the unseen workings of the Opera House and its daily life or take you behind-the-scenes to stand on stage in the world-famous Concert Hall or Opera Theatre among other exclusive opportunities and to enjoy a light breakfast in the Green Room. For details on the tours and to book click here.

Click here information on upcoming performances and to book online. There is also a Sydney Opera House and Dydney Symphony Dinner Package.

How to get there

Getting to the Sydney Opera is easy as it's located right on the water and surrounded by many of the main attractions of Sydney. It's located at Sydney Cove.