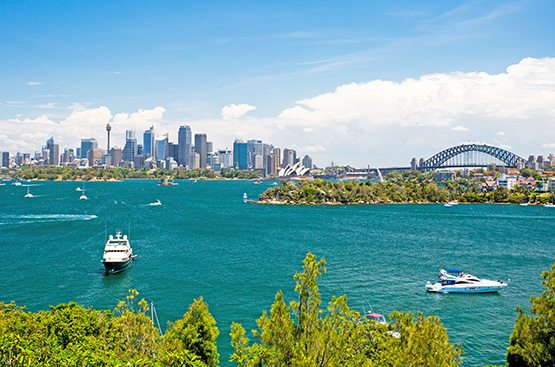 The beauty of Sydney Harbour lies in its sparkling blue water and green foreshores. Much of the northern side of the harbour is forested areas within national park, making the Sydney Harbour unique among world harbours.

Sydney Harbour is commonly referred to as the most beautiful natural harbour in the world. Those who come to see it will understand why. The 240 kilometres of shoreline encompass approximately 54 square kilometres of water, which translates to an enormous area for exploration and discovery.

Although there are exclusive homes dotted around Sydney Harbour, there are large tracts of parklands, reserves and gardens that balance the harbour environmentally. This is particularly so on the northern side of the harbour where It is possible to walk around much of the harbour foreshores and picnic in many spots.

Much of the northern side of the harbour is green with large tracts of forested foreshore land on Middle Head and North head conserved within the Sydney Harbour National Park. There are walking paths that take you from the CBD, via the Sydney Harbour Bridge, to Manly and North Head - an 8.5 hour walk. If you would rather short walks, take the ferry to Taronga Zoo and enjoy a 20-minute harbourside walk to Bradley's Head. From there you can continue on to Chowder Bay or even to Balmoral Beach.

On the eastern side of the harbour there are public reserves on South Head, which are accessed via a scenic walking path that starts at Camp Cove Beach and traverses around the forshores of South Head, passes the lighthouse on the point, and loops back to Camp Cove and Watsons Bay.

On a warm sunny day, the harbour is a vibrant blue and dotted with hundreds of sailing boats, cruise boats and ferries. The best way of seeing the harbour is to be on it and that's easy to do. Sydney Ferries, which are government run, provide an inexpensive way of seeing the most beautiful harbour in the world. The main drawbacks is that in summer the public ferries are packed to the hilt with tourists, which makes it hard to get a good vantage point in viewing the harbour sights. Another drawback is that they follow specific routes, which are not necessarily close to some of the harbour's natural and man-made attarctions, and you don't get a close viewing like you do on the cruise boats. The whole idea of the cruise boats is to give visitors the best possible experience in seeing the harbour and its attractions. The idea of the public ferries to carry Sydneysiders to work and home in the shortest, quickest way possible.

Private cruise operators run excursions around most parts of the harbour, and these vary in price and can extend from a short trip around the harbour to an evening cabaret/dinner cruise with a four-piece band and dance floor.

The transport hub of Sydney Harbour is Circular Quay, a ferry and private cruise boat terminus situated at the bottom end of the central business district. Government ferries and private cruise boats depart from here for most parts of the harbour. From here its an easy walk or short ferry ride to The Rocks, Taronga Zoo, Darling Harbour and Bondi Beach.

Another way of seeing the harbour, and gaining some perspective on its size and beauty, is to do the BridgeClimb on Sydney Harbour Bridge. You get to experience the best views of the harbour, the city skyline, the Opera House, The Rocks, Darling Harbour and North Sydney. The traffic passing underneath is also quite spectacular.

Another way of seeing the harbour from a lofty position is to take the lift to the top of Sydney Tower, Australia's highest man-made structure. Here there is a revolving restaturant where you can have lunch or dinner and watch the city go by beneath you. There is also an observation tower for general viewing.

Although we tend to associate Sydney Harbour with the city of Sydney and its urban spread, there are significant areas of bushland surrounding it which is protected in Sydney Harbour National Park and Crown and council reserves. Many of these offer extensive bushwalks where one can see the natural flora and, if you're lucky, some of the local fauna such as the long-nosed bandicoot and little penguin.