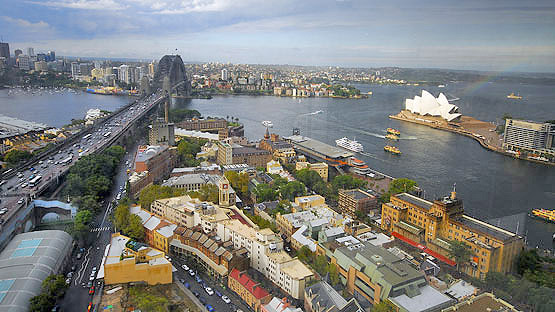 We've created a PDF document of this web page, which will
open in a new tab. You can print it out and take it with you. 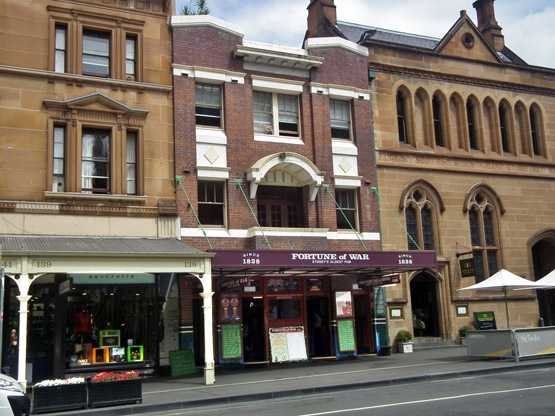 This walk explores The Rocks, the oldest part of Sydney situated on the western shores of Sydney Cove, an area steeped in history. The Rocks was the first European settlement in Australia, established by Captain Arthur Phillip of England in 1788 as a penal colony. The original buildings were built using blocks of local sandstone – hence the name “The Rocks.” To make the most of your walk, you should allow at least half a day, although the walk can be done in much quicker time. If you want to continue on to the steps that lead up to the pedestrian walkway on the harbour bridge, and then leisurely walk across the Harbour Bridge and return by ferry, allow a full day. The harbour bridge part of the walk involves steep areas and steps, so if you have a mobility problem you might prefer to end your walk in The Rocks.

Strategically situated two doors down from the Fortune of War hotel, at 127 George Street, is the original police station (No.4) in The Rocks. It was in service right up until 1974. It 2009 the go-ahead was given by the Sydney Harbour Foreshore Authority for the building to be sympathetically brought into the 21st century.

Sydney architects firm Welsh + Major took on the job and their creative design skills won them the 2014 NSW AIA Architecture Award for Heritage - Conservation award. The result is one of the best examples of how The Rocks historic buildings are being conserved, but at the same time sympathetically transformed into stylish modern-day amenities. The original Rocks Police Station changed overnight from an old lock-up to an architectural showcase with a mix of old features and stunning improvisations. A highlight of the renovation is the retention, and refurbishment, of the former cell block, charge rooms and muster room, which can all be inspected. Le Pain Quotidien, a fashionable Belgian restauarnt and bread shop, is now set up in the building.

Next to the police station is an archway that leads to Surgeons Court, the site of where the First Fleet set up its portable hospital. This archway is a portal to an adventurous series of lanes and passageways that make up Nurses Walk. The walkway was created in 1979 to honour the nurses who worked in the hospitals set up in The Rocks in the late 18th century and early 19th century. The site of the colony's first bakehouse can be found here. Small shops and cafes are scattered along the walk.

Nurses Walk runs into Suez Canal, a narrow passageway originally known as Cornwall Lane but which at one point was an open sewer. Understandably, it drew the nickname "Sewers Canal". It was later filled in but for most of the 18th century was the haunt of prostitues and gangsters.

There are some delightful cafes in this vicinity - some of them with outdoor courtyards - accessed by openings off the passageways.

Walk to the end of Suez Canal and, turning right into Harrington Street, you wil notice a series of small cottages built by the former convict William Reynolds in the 1830s. Reynolds was transported for life to Australia from Dublin. The cottages are a great example of the small dwellings of the time.

Walk to the intersection of Harrington and Argyle streets and you will notice Playfair Street diagonally opposite. Playfair Street is closed off to cars and is now a mall compising upmarket cafes and shops established in the area's olf terrace houses and cottages, many of which have historical significance. Playfair Street is also where The Rocks Markets spills over from Argyle and George streets. The market takes place on Saturdays and Sundays, between 10am and 5pm. On Fridays, between 9am and 3pm, it hosts The Rocks Friday Foodie Market. From December through to Mid June there are night markets in this vicinity, from 6-11pm. 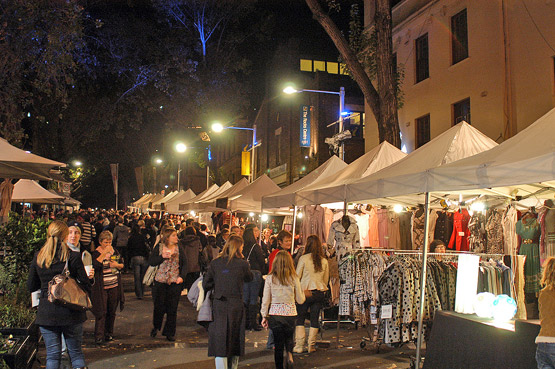 Playfair Street is arguably the heart of The Rocks for visitors and there is much to explore, but before venturing into Playfair Street turn right into Argyle Street and walk down to George Street where, diagonally opposite the intersection of George and Argyle Streets (at 110 George Street), you will find Cadmans Cottage, the oldest surviving residential building in Sydney. It was built in 1816 for the use of coxswains and their crews.

The building is the first to have been built on the shoreline of The Rocks. 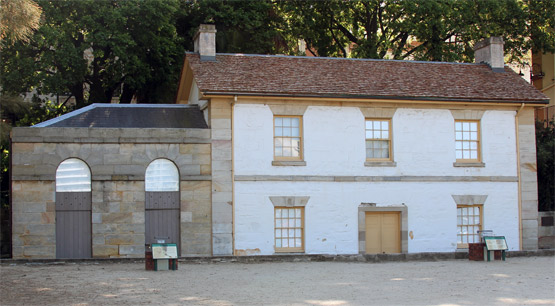 Restoration of Cadmans Cottage began in 1972 after it was proclaimed a heritage site under the National Parks and Wildlife Act. Control of the site was handed over to the Sydney Cove Redevelopment Authority.

The building is now used as the home for the Sydney Harbour National Parks Information Centre and is open to the public.

After leaving Cadmans Cottage, walk back the way you came and into Argyle Street, and then walk to Playfair Street.

On the left, at Nos. 13-15 Playfair Street, is the "Argyle Terrace", which were built in 1875. The terrace is listed with the NSW government as having "state significance" due to the the style of the buildings and how they were constructed. The terrace is one of the only grouping of modest, speculative type terraces with Italianate details remaining in The Rocks area.

There are lots of passageways in this area to explore from here including Mill Lane on the right and, at the end of Playfair Street, Sydney's tiniest street, Atherden Street, which is 28 metres long and juts up to a sandstone rockface. 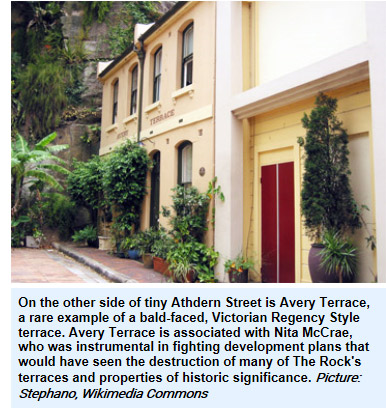 Although you wouldn't think it to look at the pictures (above and right), Atherden Street is linked to an ugly, yet fascinating chapter of Australia's early history. Ben Boyd, born in Scotland, was a London stockbroker who saw commercial opportunities in the new colony. While still in England, he floated the Royal Bank of Australia and in 1842 embarked for Australia, where he quickly became one of the largest squatters (rural landholders) in the colony.

Boyd founded the port of Boydtown on the New South Wales far south coast, where he had nine whalers working from the port relentlessly slaughtering whales. Whale oil was one of the most profitable exports in early colonial times.The oil produced by butchering whales was housed in warehouses in Atherden Street.

Despite Boyd's profiteering from the slaughter of whales, a NSW government named a national park in honour of him. The park's name remains, even though the NSW government promotes tourism through whale watching.

Boyd later met his own bloody demise in 1951 when, after departing Australia as a failed businessman and banker, he was killed at Guadalcanal in the Solomon Islands. It remains a mystery to many why Boyd was held in such high esteem by NSW officials, and why a major national park continues to be named after him.

Leaving Atherden Street, backtrack into Playfair Street and walk to No.26 Argyle Terrace. Through the doorway is a narrow passageway that takes you through to Foundation Park, one of The Rocks' - and Sydney's - hidden architectural curiosities. Foundation Park is a cluster of housing ruins dating back to the late 1800s. The eight houses that were erected here were built into a sandstone cliff between 1874 and 1878. The site is perched on the side of a hill and you can see how the houses were cut into the rockface. The houses were knocked down in 1938, leaving the foundations. The land in The Rocks is some of Sydney's most valuable commercial land, yet this curiosity of history remains to this day. 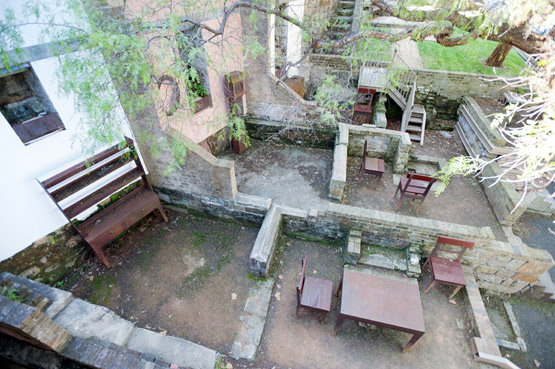 The remains of what was once eight houses erected at Foundation Park.

At the top of Foundation Park's steps, turn left into Gloucester Walk and continue to the end of the walk where you come to the Argyle Stairs. Later, you can return here and go up the stairs into Cumberland Street to get to the Sydney Harbour Bridge. But for now, go down the stairs and you exit into Argyle Street. Turn right and you are facing the "Argyle Cut", an historic tunnel cut through huge sandstone cliffs that enclosed The Rocks. The "Cut", which now serves as an underpass beneath the harbour bridge expressway, was originally created to provide access from Sydney Cove and The Rocks to Millers Point and Darling Harbour. It was begun in 1843 with convicts chipping away at the sandstone with picks but the work was suspended soon after due to the enormity of the task. In 1859 it was resumed, but this time with the use of explosives and council labour.

If you go through the Argyle Cut and walk a further 70 metres, you will notice parkland on your left with stairs that lead up to the grounds of the Sydney Observatory. If you make your way up to the top of the hill you will experience glorious views of the Sydney Harbour Bridge and the point where the Paramatta River flows into Sydney Harbour. There are beautiful shade trees here and you can sit on the lawn and enjoy the views. This spot is so scenic that it is constantly in demand for wedding ceremonies, so with a little luck you may catch a wedding during your visit.

Leaving Observatory Hill and backtracking through the Argyle Cut tunnel, and back to the Argyle Stairs, you now have a choice:

Once on the walkway, you soon come to the pylons that support the bridge's 504-metre arch. The south-east pylon has a lookout, where for a small admission fee you can experience great views of the Opera House, city skyline and Sydney Harbour.

The walk across the bridge should take from 15 to 30 minutes, depending on how many times you stop to admire the harbour and take photos. The pedestrian walkway also offers some great views of Circular Quay and the Opera House.

Once you've walked across the bridge, you can backtrack and walk back, and catch different views along the way. Alternatively, you can walk a kilometre or so further to where steps will take you down off the bridge. Once off the bridge, you have the option of walking to the nearby Milsons Point railway station and catching a train to the Quay, or else walking down the hill to the Milsons Point ferry wharf and catching a ferry to the Quay.

And that concludes our both our Rocks walk and our 3-day self-guided tour. We hope you enjoy the experience!