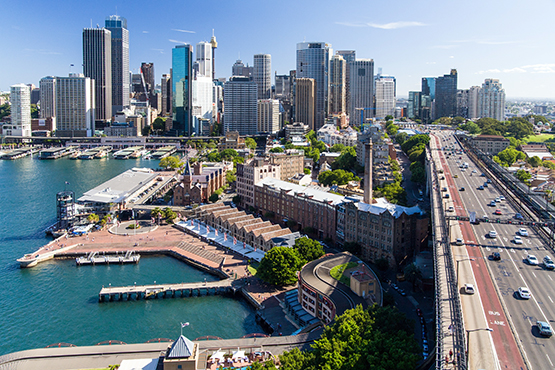 The Rocks district lies snugly between Circular Quay and the Sydney Harbour Bridge road on the western shores of Sydney Cove.   Picture: © Sydney.com.au

The Rocks is everyone's
favourite place to explore

This is the third day of a three-day walk. Covers: The Rocks and Sydney Harbour Bridge. For many visitors to Sydney this is the most interesting part of our three-day walk as it explores the oldest part of Sydney - the western shores of Sydney Cove - an area steeped in history. The Rocks was the first European settlement in Australia, established by Captain Arthur Phillip of England in 1788 as a penal colony. The original buildings were built using blocks of local sandstone, hence the name The Rocks. To make the most of your walk through The Rocks, you should allow at least half a day. If you want to continue on and walk across the Harbour Bridge, allow a full day. This walk involves some steep areas and lots of steps, so if you have a mobility problem you might prefer to keep to the flatter areas of the walk.

START: at Circular Quay and walk to George Street. Turn right and you will see the Harbour Bridge in the distance. You are now in The Rocks.

Continue along George Street and almost immediately on the left is the Russell Hotel. Although now a boutique hotel, it was built in 1887 on the site of what was once a "Moveable Hospital for His Majesty's Distant Possessions" (circa 1790).

Walk on and you'll come to the Fortune of War, Sydney's oldest pub (circa 1828). It sits in between two sandstone buildings - one a former bank - dating back to the early 1880s.

The next building is the original The Rocks Police Station, which closed in 1974. You can inspect the cells, which are much the same as when they were built in 1882.

Next to the police station is an archway that leads to Surgeons Court, the site of where the First Fleet set up its portable hospital. This archway is a portal to an adventurous series of lanes and passageways that make up Nurses Walk. The walkway was created in 1979 to honour the nurses who worked in the hospitals set up in The Rocks in the late 18th century and early 19th century. The site of the colony's first bakehouse can be found here. Small shops and cafes are scattered along the walk.

Nurses Walk runs into Suez Canal, a narrow passageway originally known as Cornwall Lane but which at one point was an open sewer. Understandably, it drew the nickname "Sewers Canal". It was later filled in but for most of the 18th century was the haunt of prostitues and gangsters.

There are some delightful cafes in this vicinity - some of them with outdoor courtyards - accessed by openings off the passageways.

Walk to the end of Suez Canal and, turning right into Harrington Street, you wil notice a series of small cottages built by the former convict William Reynolds in the 1830s. Reynolds was transported for life to Australia from Dublin. The cottages are a great example of the small dweinngs of the time.

On the left, at Nos. 13-15 Playfair Street, is the "Argyle Terrace", which were built in 1875. The terrace is listed with the NSW government as having "state significance" due to the the style of the buildings and how they were constructed. The terrace is one of the only grouping of modest, speculative type terraces with Italianate details remaining in The Rocks area.

There are lots of passageways in this area to explore from here including Mill Lane on the right and, at the end of Playfair Street, Sydney's tiniest street, Atherden Street. 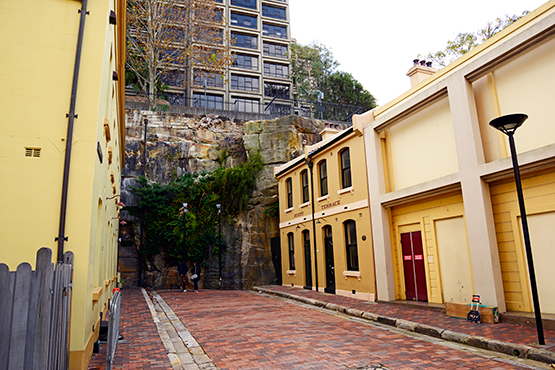 Atherden Street, Sydney's shortest street, has a dark history - it was once at the centre of commercial whaling activities.   Picture: © Sydney.com.au

Atherden Street is linked to a fascinating, yet ugly, part of Australia's early history. Ben Boyd, born in Scotland, was a London stockbroker who saw commercial opportunities in the new colony. While still in England, he floated the Royal Bank of Australia and in 1842 embarked for Australia, where he quickly became one of the largest squatters (rural landholders) in the colony. Boyd founded the port of Boydtown on the New South Wales far south coast, where he had nine whalers working from the port relentlessly slaughtering whales. Whale oil was one of the most profitable exports in early colonial times.The oil produced by butchering whales was housed in warehouses in Atherden Street. Despite Boyd's profiteering from the slaughter of whales, a NSW government named a national park in honour of him. The park's name remains, even though the NSW government promotes tourism through whale watching.

Boyd later met his own bloody demise in 1951 when, after departing Australia as a failed businessman and banker, he was killed at Guadalcanal in the Solomon Islands. It remains a mystery to many why Boyd was held in such high esteem by NSW officials, and why a major national park continues to be named after him.

Leaving Atherden Street, backtrack into Playfair Street and turn right just before Argyle Terrace. You are now entering an area that has rough surfaces and quite a few steps. A passageway takes you through to Foundation Park, one of The Rocks' - and Sydney's - hidden architectural curiosities. Foundation Park is a cluster of housing ruins dating back to the late 1800s. The eight houses that were erected here were built into a sandstone cliff between 1874 and 1878. The site is perched on a hill and you can see how the houses were cut into rockfaces. The houses were knocked down in 1938, leaving the foundations. The Rocks is some of Sydney's most valuable commercial land, yet this curiosity of history remains to this day.

At the top of Foundation Park's steps, turn left into Gloucester Walk and continue to the end of the walk where you come to the Argyle Stairs. Later, you can return here and go up the stairs into Cumberland Street to get to the Sydney Harbour Bridge. But for now, go down the stairs and turn left into Argyle Street and walk through the underpass. About 70 metres past the underpass, there is a set of stairs on the left that leads to the grounds of the Sydney Observatory. If you make your way up to the top of the hill you will experience glorious views of the Sydney Harbour Bridge and the point where the Paramatta River flows into Sydney Harbour. There are beautiful shade trees here and you can sit on the lawn and enjoy the views. This spot is so scenic that it is constantly in demand for wedding ceremonies, so with a little luck you may catch a wedding during their visit.

Leaving Observatory Hill and backtracking through the underpass and back to the Argyle Stairs, you now have a choice: you can continue walking down Arygle Street towards Harrington Street and keep exploring The Rocks area; or you can go up the stairs, turn left into Cumberland Street and across the road to the Bridge Stairs. These stairs will take you up to the pedestrian-only walkway that runs across the eastern side of the Sydney Harbour Bridge (there is a cycleway on the western side of the bridge).

Once on the walkway, you soon come to the pylons that support the bridge's 504-metre arch. The south-east pylon has a lookout, where for a small admission fee you can experience great views of the Opera House, city skyline and Sydney Harbour. 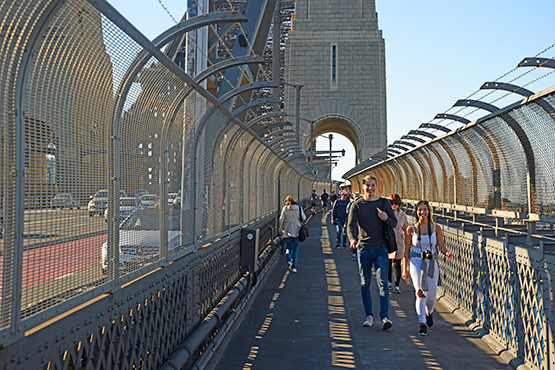 The walkway on the Sydney Harbour Bridge.   Picture: © Sydney.com.au

The walk across the bridge should take from 15 to 30 minutes, depending on how many times you stop to admire the harbour and take photos. The pedestrian walkway also offers some great views of Circular Quay and the Opera House.

Once you've walked across the bridge, you can backtrack and walk back, and catch different views along the way. Alternatively, you can walk a kilometre or so further to where steps will take you down off the bridge. Once off the bridge, you have the option of walking to the nearby Milsons Point railway station and catching a train to the Quay, or else walking down the hill to the Milsons Point ferry wharf and catching a ferry to the Quay.

And that concludes our 3-day self-guided tour. Hope you enjoyed our preview! You can also check out The Rocks Self-Guided Walking Tour, which takes you on a more comprehensive walk threough The Rocks.